In this example, an analysis will be done of a worker lifting a heavy box and preparing to place the box on a dolly. This is a typical task for a person working in a warehouse. Similar analyses can be done for a wide variety of tasks.

To do this analysis, we need various measurements of the worker, the box, and the posture the worker adopts to perform the lift. For the worker, we need to know the worker’s sex, height, and weight. This information is entered into the Anthropometry dialog box. In this case, the worker is a 50% percentile male (69.7 inches tall and 165.6 lbs).

In order to get information about the posture, a video camera was used to record his movements. The movie was then digitized and several snapshots were taken. For this example, we chose to study the following posture: Using the snapshot above, an estimation was made of the various joint angles. There are three methods that can be used to enter the joint angle information into 3D SSPP. First, if we input the relative location of the box to the worker’s body, 3D SSPP can perform a posture prediction, which will automatically position the worker according to the inverse kinematics algorithm. This is often a good place to start. Second, 3D SSPP allows us to directly manipulate the posture by clicking and dragging various joints to the desired locations. The third method is to use the Joint Angles dialog box where we can directly input the angles of various joints. This method offers the most control. This is the method we used in this analysis. 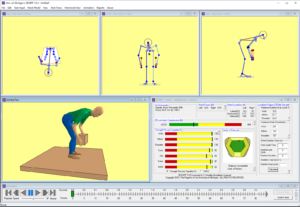 3D SSPP can provide various analyses using the Report menu that include calculating the force and moment vectors, strength capabilities, and low back compression forces. The Analysis Summary report provides information about the L5/S1 compression forces and the percent of the population capable of performing this task. The L5/S1 disc compression force for this lift is 701 +- 54 pounds. This value is calculated by the 2D Sagittal Plane Lowback Analysis Report included in 3D SSPP. NIOSH guidelines, based on biomechanical studies and industrial epidemiology, set the Back Compression Design Limit (BCDL) equal to 770 lbs (or 3400 newtons). At this level some workers would be at increased risk of injury. In this lifting task, although the 701 pounds does not exceed the BCDL, it is still fairly high and the task should be considered for improvement.

According to this report, the vast majority of 50 percentile male workers have the necessary muscle strength to perform this task.

Because the Analysis Summary report indicates that the low back compression force is a risk factor, additional information can be found regarding the low back in the 3D Lowback Analysis report. This report provides a more complete breakdown of the components that contribute to the disc compression force. In addition, it also provides information about the disc shear forces. Note: This model uses a different algorithm to calculate the low back disc compression forces (it calculates the forces at L4/L5) than the 2D Sagittal Plane Lowback Analysis. As a result, the values may differ slightly.

The information and analyses provided by 3D SSPP can be used to aid in evaluating the physical demands of a prescribed job and proposed workplace designs and redesigns prior to the actual construction or reconstruction of the workplace or task. For this lifting task, we would recommend that the worker avoid using this posture. 3D SSPP can be used to make posture recommendations by evaluating other postures to determine the safest posture.

Reminder: This program should not be used as the sole determinant of worker strength performance or job designs based on that performance. Other criteria and professional judgement are required to properly design a safe and productive job.